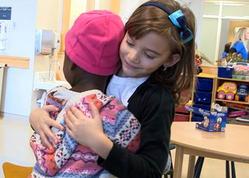 Read about our other founders on yoga page

Welcome to Childhood Cancer Kids.  Founded by Sierra, a childhood cancer survivor.  Learn about her missions below.  This Today Show segment is a great way to learn about what she is doing.  The Today Show named her the Kindest Kid in America and she is the Sprout Network's Chief Kindness Officer. More videos and news can be found on our News Pages

Cancer Sierra is our founder and Childhood Cancer survivor.  She was diagnosed on June 4, 2012 with kidney cancer. She underwent surgery on June 6th at Boston Children's Hospital and had the tumor removed. The tumor was determined to be a Wilms’ tumor stage 2.  It was the size of a grapefruit.  It grew rapidly over the course of two weeks.  After her surgery she recovered at Boston Children’s Hospital for over a week.   She was strong and recovered well.  Her first day of chemo was scheduled on her gymnastics end of the year celebration.  She wanted to go to gymnastics.  She could not do any of her routine but proudly held the flag and said “Let the games begin!”  Chemo was on Mondays at the Jimmy Fund/ Dana Faber center and later at Yale Pediatric Hematology and Oncology.  The day after chemo, the affects would set in.  She would get nauseous, throw up, feel emotional, and extremely tired.   But on Friday, she would always wake up and say “What are you going to do for fun today?”   Half a year later, Sierra was singing a song she made up “Last Day of Chemo.”

Why Yoga?  Over the course of her treatments she learned to deal with  the stress of the needles and the side effects with yoga breathing.  Her mom is a yoga instructor and Sierra had been doing yoga since she was a baby.  She began to use her breathing to help calm her fears of getting her chemotherapy port accessed.  The port looks like a bottle cap placed under the skin in the chest area.  A large needle that looks like a dragonfly is put in the port and the chemotherapy medications are later attached.  Sierra worked on breathing before the needle came towards her port and went from having to be held down by two nurses and coached by a therapist to being able the breath and relax while getting her port accessed.  She continues to use yoga to help her with all the testing that follows cancer treatments.

Charity  A year after her experience, Sierra decided she wanted to give something to other kids with cancer and founded Childhood Cancer Kids.  She has three missions: fundraise for places that support childhood cancer, provided yoga relaxation techniques
for kids going through and recovering from cancer, and raising the level of Childhood Cancer Awareness Month in September.  During Breast Cancer Awareness Month of October 2013, she saw all the pink ribbons and football players wearing pink. She said “What about kids cancer?  People should do more about kids cancer.”  Her mom said, “You know, you could do something about that.”  And she is.  She came up with the idea and with the support of her family founded her organization.  She, her sister, and mom have board meetings a few times a month.

Her experience included not only the difficult parts of being a child with cancer but also included meeting Saltalamacchia of the Boston Red Sox during a chemo treatment and getting to be first in line to meet Gabby Douglas at a book signing event at R.J. Julia’s in Connecticut, receiving post chemo toys from the Toy Closet Program at Yale Pediatric Oncology, benefiting from many organizations like Wigs for Kids, Sunshine Kids, Hole in Wall Gang Camp, Icing Smiles which supplied her Last Day of Chemo party cake and Make a Wish which granted her a trip to Harry Potter Studios in London.  She also had a wish to be a star but that is hard to make come true.  Except Roman Media heard about her story and wrote in a part for her.  She had the whole experience, a star’s chair, make up, and said her line with about four takes.

On January 4, 2014 she walked down the red carpet with the sister at the New England Premiere Event for MILWOOD  at
the Regent Theater in Arlington, Ma.  During the premier she promoted her Childhood Cancer Kids organization.  See our facebook page for links and articles.

Make-A-Wish CT reconnected with Sierra on a campaign to raise skyline miles on January 10th and were so impressed with her mission that they are honoring her and Childhood Cancer Kids at their annual Gala on March 29th, 2014.

Later that year she was named Kindest Kid in America on the Today Show, Kathie Lee and Hoda, and is the Sprout Network Chief Kindness Officer.